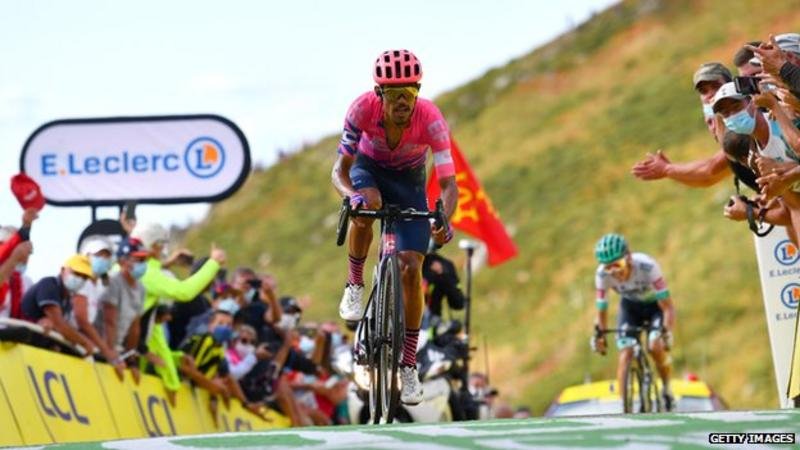 Primoz Roglic extended his lead in the yellow jersey on the Tour de France after Daniel Martinez claimed a superb win on stage 13.

Roglic and fellow Slovenian Tadej Pogacar dropped all of their rivals on a gruelling final climb to Puy Mary.

Fellow Colombian Bernal, who had trailed Roglic by 21 seconds after stage 12, struggled on the brutal summit finish and is now 59 seconds back on Roglic and 15 seconds down on Pogacar.

Frenchmen Guillaume Martin and Romain Bardet, who started the stage third and fourth overall respectively, also cracked and are out of the top 10.

"I see this as a Slovenian day, not a Colombian day," said Roglic.

"I'm super happy with how it went but here's still a lot of road ahead of us and next week there'll different scenarios with different riders."

When the day began, the top 10 on general classification was the closest it had been at this stage of any Tour since 1947, but the race ripped apart on the two final climbs.

Ineos Grenadiers set a high pace on the penultimate climb of the Col de Neronne, dropping Britain's Adam Yates as well as Martin and Bardet, who crashed earlier in the stage.

Pavel Sivakov had sat up from the breakaway to work for Bernal, who initially also had Richard Carapaz in support, suggesting the defending champion could look to attack.

But Roglic's Jumbo-Visma again displayed they are the strongest team in the race, with Sepp Kuss and Tom Dumoulin taking up the pace-setting and isolating Bernal.

When Pogacar sought to animate the race once again by attacking, only Roglic could go with his friend and compatriot, with Bernal distanced.

Richie Porte, Mikel Landa and Miguel Angel Lopez did well to limit their losses and all move up on GC, but a visibly suffering Bernal came in 38 seconds down on Roglic, who had only led the Colombian on bonus seconds before this stage.

Yates, who is now seventh overall, recovered well to finish alongside Nairo Quitana and two seconds back on Bernal and Rigoberto Uran.

Martinez, who won this year's Criterium du Dauphine after Roglic pulled out while leading, proved to be the strongest rider from a 17-man breakaway that finally established after a frenetic start to the stage.

His team-mates Hugh Carthy and Neilson Powless both attacked first but were each brought back before Max Schachmann dropped Powless to begin the final climb alone.

When Martinez countered, Schachmann's Bora-Hansgrohe team-mate Kamna jumped on his wheel and let the Colombian do all the work to reel in the German.

Kamna twice tried to kick clear of Martinez in the final 2km with sections of 15% gradient after Schachmann was dropped, but Martinez responded each time before making his own decisive move late on.

Saturday's 14th stage is a 194km route from Clermont-Ferrand to Lyon.