Premier League calls on government to open stadiums on 1 October 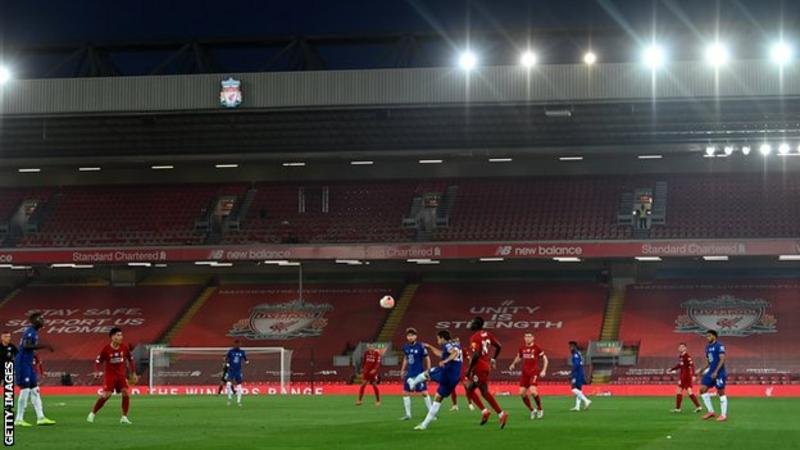 Premier League clubs have urged the UK government to stick to its proposal of allowing fans to return to stadiums from 1 October.

The government has restricted pilot events to 1,000 spectators and is reviewing its initial target date of when more fans could attend venues.

The move followed a rise in coronavirus cases in parts of the country.

The Premier League met with clubs on Thursday and ensured stadiums "will be among the safest public places".

"Clubs will adopt a range of common standards, which will help deliver bio-secure, safe environments for fans across the League," the Premier League said.

"Taking into account the high safety standards which will be set by the Premier League in conjunction with the relevant public authorities, the League and clubs urge Government to remain committed to the 1 October date for the controlled return of fans to sporting venues."

The majority of sports in England have been played behind closed doors since the coronavirus lockdown in March.

During Thursday's meeting, Premier League clubs said the loss of revenue generated at stadiums from matches "is having a significant impact across the League as well as on the football pyramid and local and national economies".  สูตรบาคาร่าฟรี ป๋าเซียน

Premier League chief executive Richard Masters has already said a failure to return fans to stadiums quickly could cost the league's 20 clubs £700m during the 2020-21 season.

This weekend, seven fixtures in the EFL will welcome crowds of up to 1,000.

Hull City's home fixture with Crewe was also due to host fans but with local coronavirus cases more than tripling in the past week, the local council stepped in to cancel the pilot event.